May 09, 2011
The art of detecting hidden messages in digital media like images , audio or video is known as Steganalysis.The goal of Steganalysis is to identify / detect suspected files and determine any secret or confidential information is hidden in them and if possible recover the information. 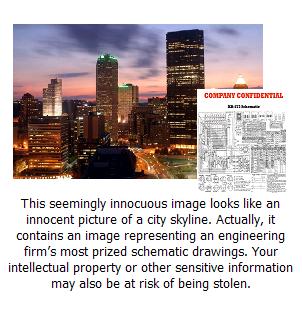 There are hundreds of stego applications available on Internet free of cost or as trial softwares. Most  of these applications take advantage of "image noise" in an image file, such as a typical JPG.Image noise is most apparent in image regions with low signal level, such as shadow regions. Application like JPGHide can be used to store information in these low bit regions of the image that are undetectable to the human eye. For example, picture of a sunset is not very clear but has lots of shadow regions. This suspects that it could easily contain store a secret message or another image entirely.

Most Data Leakage Prevention (DLP) solutions in the market provide a wide range of security applications and threat detection , but none of them provide detecting steganography in files flowing  inbound and outbound on the corporate firewall. Sensitive data loss is of utmost concern to a corporate management.

Detecting steganography here implies finding the signature or patterns that a steganoraphy application has created in a file used for hiding information. This is very much similar to detecting a virus signature in a file.

StegAlyzerRTS detects steganography by comparing the file fingerprints, or hash values, to a database of known file, or artifact, hash values associated with over 900 steganography applications .StegAlyzerRTS detects the theft of confidential information hidden inside other files which are then sent to an external recipient as an e-mail attachment or posted on a publicly accessible web site.

Some of the key-features of StegAlyzerRTS are :
* Detect fingerprints of over 900 steganography applications
* Detect signatures of over 55 steganography applications
* Send real-time alerts to network security administrators
* Retain copies of suspect files for further analysis
* Does not impact network performance
* Available in 100 Mbps and 1 Gbps throughput models

As the usage of computers by criminals increase , it will add up more to the rate of cyber crime compared to terrestrial/physical crime.Let’s define a cyber criminal as any human being who uses a computer to violate laws.

If only 1% of the estimated 2 billion Internet users were using steganography to steal sensitive information, that would be approximately 20 million cyber criminals. Now if from these 20 million cyber criminals about 1% are using steganography to steal information , it would count to 20,000 insiders , who could steal confidential data without ever being caught.Thus the StegAlyzerRTS is to detect such criminals who would steal and sell company's Intellectual Property which is the real asset of the company.