Computer Provisioning - the heart of IT industry

May 21, 2014
Every IT industry would have computers and employees ranging from few hundreds to thousands or lakhs (IBM,Microsoft,TCS,Infosys). Most employees of the company work directly on computers through support / development / testing / re-search. Managing all these computers manually through sys-admins becomes time consuming and impossible to keep them consistent with the company's policies , standards and firewall rules.

For example , Consider a group of employees are working on Software development project which needs Oracle as backend , another group working on testing a Banking software which might need SQL server , Visual Studio and other softwares. Its also possible that the team is spread across the globe. Another group of employees might be working on Sales of a particular company product/software , they would need another set of softwares ... Another situation is in BPO's where the computer needs to be formatted every 3 months ... its a tough call to manage all these things manually by administrators ... so what do we do now ???

Typically following tasks are performed on a computer to make is usable by the employee : 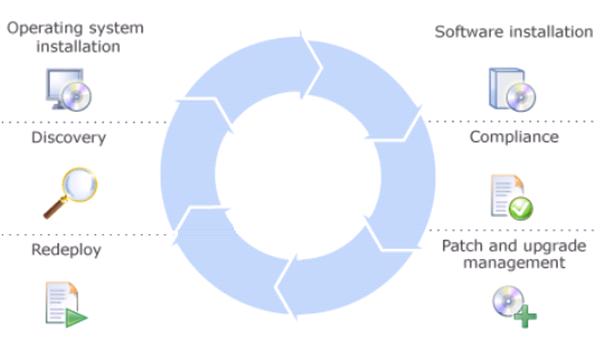 Well , automate all these manual steps either through scripts and have them run remotely ... this looks good but not the best solution as there's no record of which scripts were run when and on which computers during which time/day of the year , also its not easy to debug if the script fails ...

So whats the next solution ???

The answer is use the same scripts but integrate them with a software front-end and back-end to keep a track of each step performed.In-short we are doing provisioning (providing or making available).

Now we can have those scripts run constantly through the software and monitor the action performed.
Now the administrator can trace the success/failure details directly from his computer through the provisioning software.