Why one should not use Stock Photos

February 19, 2012
Stock photos are photographs that are copyrighted to some extend and cannot be freely used for either personal or commercial purposes. Stock images are licensed for specific use like promoting certain products, e-marketing or as a display label on some products. Stock Photos help organizations save money on hiring a professional photographer and then creating a promo banner for marketing. Special images comprising of individual or group of people with all possible emotions, culture and age-group  are available on stock photo providing agencies/websites like Shutterstock.com , BigstockPhoto.com , photos.com and many others.
These agencies offer mostly photographs that have been shot by professional photographers. But the biggest problem with stock images is that two competitors could end up buying the same photo. Well that would be the biggest drawback in marketing their products for both the companies. In such situations  - its the advertisement audience who start getting a wrong impression of the company and are left in a confused state.

Such details should be taken care by the marketing department of the company but the pressure to release the product before the competitor, is so much that they end up buying the best available image which obviously even the competitor would buy due to similar pressure conditions.

Everyone knows the amount of advertisements shown in  India on Indian Televisions , on Roads, big banners above the buildings , advertisements on the walls of the fly-overs , on the traffic signal pole , on the road light poles, on public transport systems etc. Its just bombarding the end-consumer with ads. Recently while surfing the Internet I found an interesting image on my friends facebook profile. It showed how two competitors were using the same image for marketing. So I decided to find out the truth. Let me first show you the image : 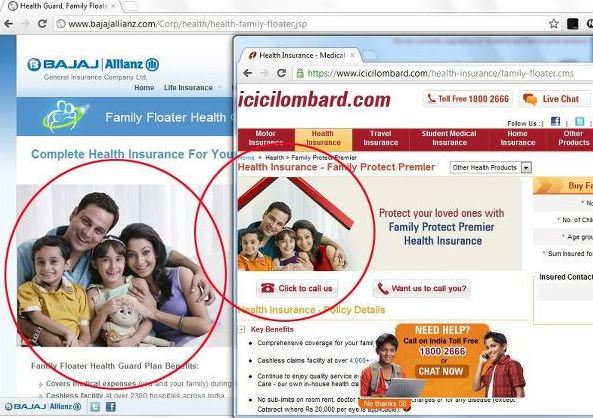 As you can see its the same family photo used on both Health Insurance company's websites. Isn't that shocking ? Well I decided to find the truth myself. I opened the same link (Bajaj Allianz.com - Health Family Floater) for Bajaj-Allianz as shown in the above image.To my surprise the image shown was different. This is what I found : 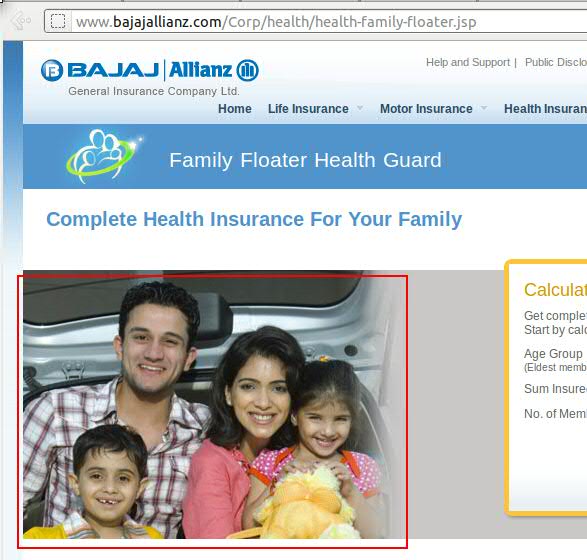 Now its seems that either the photo on Facebook could be a fake image or BajajAllianz changed the image. So I surfed the link to icicilomard to find  the story there ... found the unexpected. 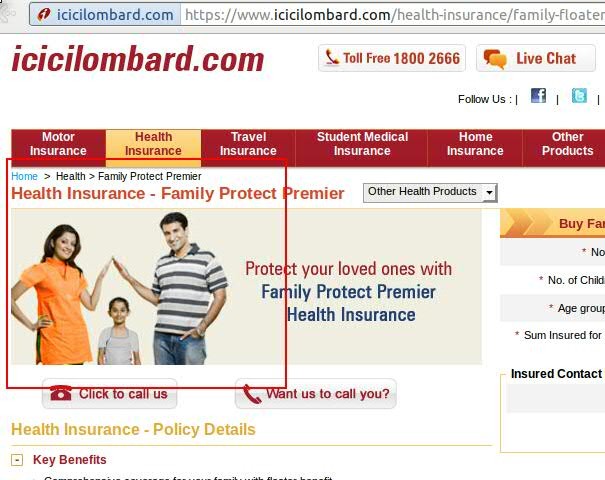 This means both the companies have changed the photo or the image on facebook was a fake.Lets handle it case by case : Why would both the companies change the photo ??? Well there could be a third company who has the rights. I tried looking at other health insurance companies in India like : Max NewYork life Insurance, LIC , TATA AIG and others. Guess what Tata AIG had the same photo shown in the first image.From this link here's a screenshot of what I found : 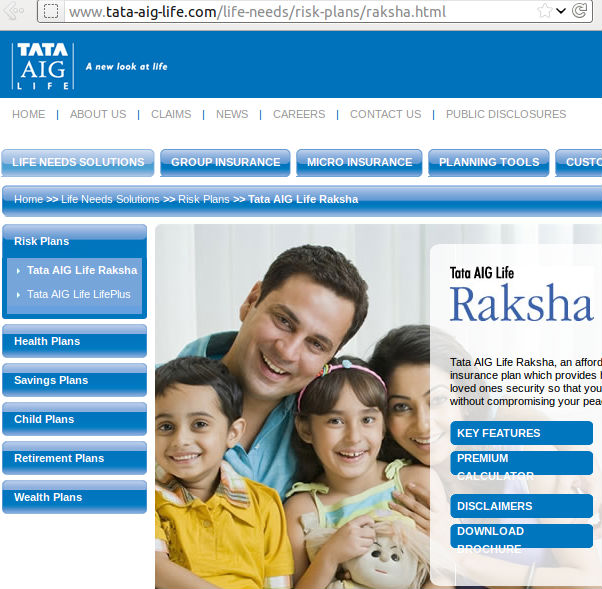 Oh mann ... why are these companies using stock photos ??? seems like customers are attracted towards choosing the health insurance of the company seeing at the happy healthy family photo and not by the features provided. Well that's how the marketing industry runs ... thats how the brains of majority of the population are trained to look at things... A good soap is the one being used by a celebrity in the Advertisement and not the one which has ingredients to protect, moisturize and deodorize your skin ( and trust me .. its only in the advertisement and I am sure that the celebrity may not be using it in real life ). Lets get back to our original health insurance stuff...

If BajajAllianz and icicilombard changed the images ... how can I see that history ??? Well thanks to my techy insight and ofcourse Google. Google always caches the web pages for some period of time. I quickly tried to find out the cahced webpages of BajajAllianz & icicilombard. Below are some satisfying results : 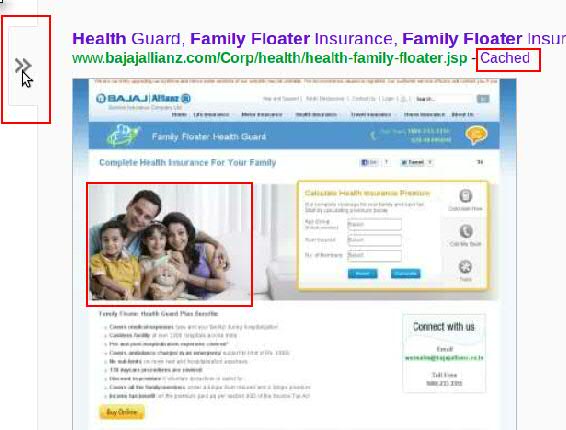 See its the same image being used by Tata AIG ... below images show that even icicilombard had used the same image for marketing... this is something serious that both the marketing companies need to consider. One solution is to start using your employees photographs as they represent the company. Results for icicilombard's cached webpage on Google : 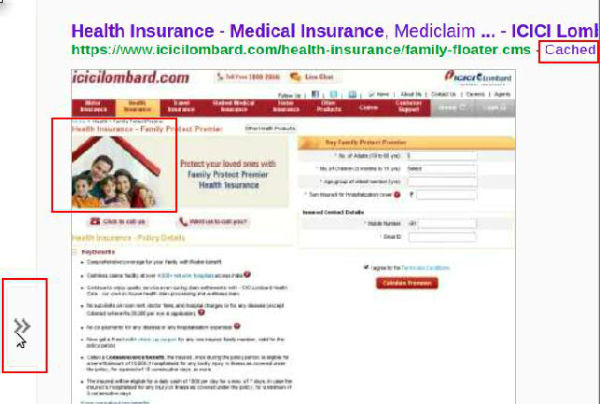 Bizzare ... this was not meant to blogged about , but thats the truth ... And Guess what after Googling so much on a sunday evening ... there's another reknown product in India that uses the same photo ... (luckily its not related to health insurance but a health supplement ... hahaha ) 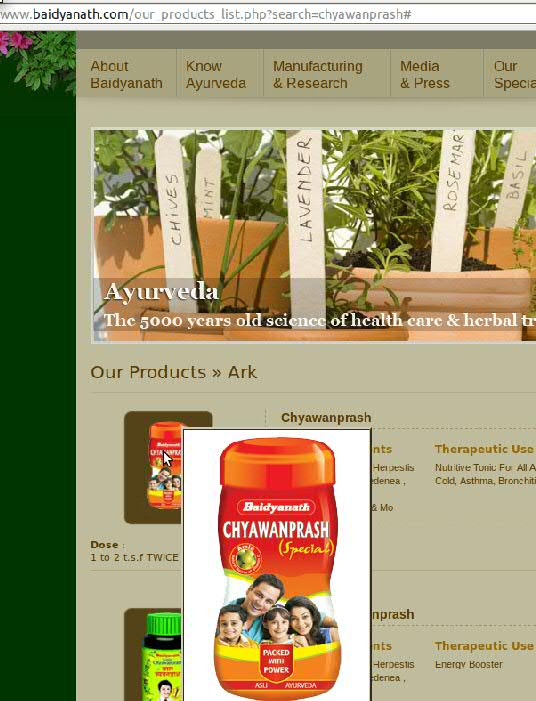 Well, enough of investigation, else I might find many products using the same image for marketing... These are some marketing fundamentals which even big companies in India fail to follow.